Naomi returned home from the visit to the security guard and began to piece things together.

“Kurai Yohei. Could Jaakuna really be working for them? There’s no telling what an organization like that could be planning to do with weapons that powerful. Said Naomi as she pulled up the little bit of background she could find on the evil agency.

“However, from what the researchers told me, they only have the blueprints, not the actual weapons themselves as they require a special type of metal to work, meaning the next course of action Kurai Yohei would probably take, would be to go after that metal.”

Naomi researched on her laptop where adamantine and ebonite were being mined, and sure enough, there was only one mining company that took on such a task.

“Kraig’s mining company, that narrows it down well enough. This must be Kurai Yohei’s next target. I have to get there first” said Naomi.

Naomi prepared her guns, threw on her signature golden jacket, and jumped into her charger as she fastened her seatbelt over her voluptuous breasts.

As she raced to the mining company, Jaakuna was also riding to the same location in her camero, as her breasts were bouncing up and down from the rocky road.

“The mining company should be in the northern district of Okinawa. I doubt they have any kind of security to right home about, but just to be on the safe side, I have a new toy I’ve been wanting to try out.” Said Jaakuna as she clipped on a very futuristic looking mechanical buckle that had four buttons onto her pants.

Jaakuna arrived at the mining company, but before she pulled in, she could see the facility was gated and secured. She then pulled up a picture on her phone of the head researcher Miss Akure, and pressed one of the buttons on her buckle. This caused the buckle to scan the picture on her phone. Bizarrely enough, bright blue electricity sparkled from the buckle engulfing her body, causing her to morph into Miss Akure! The buckle that Jaakuna put on turned out to be a shapeshifting device. 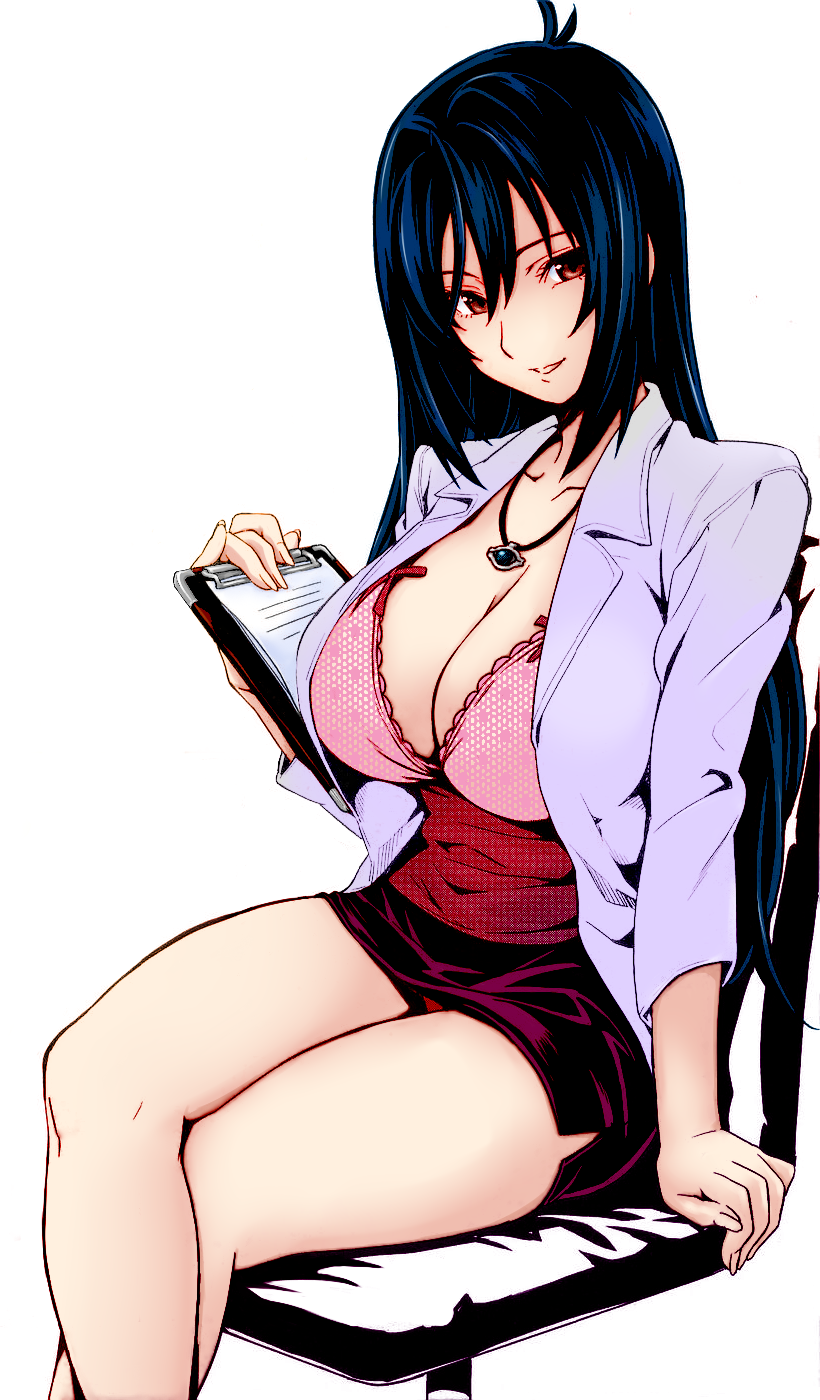 As she pulled up, she was greeted by the guard at the gate.

“Yes, I am Miss Akure, head of the research and development department at Okinawa lab. I need to speak with the foreman, It is an urgent matter.” Said Jaakuna in disguise.

“Yes, Yes I understand. I heard about the recent incident, go right ahead. Have a great day.”

“Thank you, you as well…. Oblivious fool”. Jakuuna said as she drove off into the facility.

Jaakuna pulled up to the main office and was greeted by the foreman.

“Hi miss Akure, to what do I owe the pleasure of you stopping by” said the foreman.

“Well, as I’m sure you’ve heard of what’s going on, I need to be sure you guys are taking the proper procedures to keep the adamantine and ebonite safe. May I see where it is being stored?”

The foreman led Jaakuna to a vault that was located deep underground.

“Both metals are being stored in here ma’am. We’ve managed to mine almost a half a ton”.

” I see, I see.. Good work, I’m sure no one will be able to find or access it here.” Said the disguised Jaakuna.

“Oh, by all means please take your time” said Jaakuna.

As the foreman left, Jaakuna pulled out a small remote mine and planted it on the vault’s lock. She began to set the mine to a low setting as to not cause an unnecessarily big explosion. As she pressed the detonation button, the lock blew off the door. She opened the door of the vault revealing all of the metal. “HaHaHaHa.. As I said, easy pickings.”

Back at the office, foreman Jackson is greeted by Naomi.

“Hi, I’m detective Naomi. Sorry to barge in on you like this, but I have reason to believe that you’re being targeted for the special metals that you are mining”.

“Nice to meet you detective, and I feared as much already, which is why we are taking special measures to make sure the metal is safe. In fact, Miss Akure is also visiting to make sure we were following proper procedures.”

“Really, I just spoke to her this morning, and she was working at the lab. She didn’t mention anything about coming here.” Said Naomi with a puzzled look on her face.

Jaakuna began taking huge plates of the metal and put them into two large briefcases. She ran back up above ground and walked thru the facility trying to avoid being seen by anyone to avoid suspicion. She came back to the main office where her car was parked. As she hid behind a wall across from the front desk, she noticed the foreman talking to an awfully familiar face.

“N-Naomi? What the hell is she doing here. Shit. Is she still with the FBI? Of all the people to be here right now.” Jaakuna thought to herself with an agitated look. “Ok, I’ll have to play my cards right to keep this from getting too messy.” Jaakuna placed the brief cases down and walked out from behind the wall.

“Oh, hey miss Akure. What are you doing here, I thought you were at the lab.” said Naomi.

“Um, Yes I was, but with everything that’s been happening I couldn’t rest without making sure this situation didn’t get any worse than it already has.” Said Jaakuna in disguise

“You know, you could’ve just contacted me, I had already suspected someone would try and target the metal.” Said Naomi.

“Yeah, you’re right, I guess I just wanted to see with my own eyes. Well, you can get going now miss Naomi, it looks like these fine fellows have everything under control.”

“Perhaps, but we’re dealing with some very dangerous criminals, I better stick around for a while.”

“Look, sweetie, that’s really not necessary. I insist you leave.”

Naomi was puzzled why Miss Akure was so insistent about her leaving, and suddenly her phone rang.

“Hello, Miss Naomi. I was calling to inform you that although we haven’t been able to recover any of the files, we’ve repaired the lab” said Miss Akure.

“Miss Akure? But if you’re at the lab, then who’s…?” said Naomi as her eyes bucked wide open at the imposter.

Jaakuna smacked her face.. “Tch.. I guess the jig is up.” Jaakuna said as she pressed the button on her buckle reverting herself back into her normal voluptuous appearance.

“Jaakuna! So you were behind this”. Said Naomi.

“I gotta say Naomi, not bad, not bad at all. You’re powers of deduction are as good as ever. You always were good at analyzing the facts. If it were anyone else but me, this would be over. But it’s me, so things are about to get really ugly for you”. Said Jaakuna

“She.. She shapeshifted? What the hell is going on here?” said the foreman.

“Run.. I’ll take care of this, you don’t wanna get caught in the crossfire.” Said Naomi.

“Um right, you don’t have to tell me twice.” Said the foreman as he bolted out of the building.

“Ha, you want a piece of this, then come and get it..” laughed Jaakuna.

Next time: A fierce battle. Jaakuna vs Naomi!

The Association of Super Beings and Extraordinary Humans: Chapter 10

So yeah. My first official day out in the city not only gave me some newfound confidence, it really opened my eyes. It showed me the kinda man I wanted to be. Well, I guess the kinda person I wanted to be is a more literal way of putting it. And I’m guessing from the […]

The gang meandered the desert without food or water for days…just endless beer from Tekra’s magic stein. “I’m gonna eat some sand” said Aura. Aura, Caoihme, Burn, Nikolai, and Elon woddled through the sand. In the intense heat the crew could hardly think clearly; but all at once, they saw a shift in the sand. […]

The Association of Super Beings and Extraordinary Humans: Chapter 19

At this point, I honestly accepted my fate. “This is it” I thought to myself “You’ve failed yet again”. But before he sent me to my grave, a voice ran out and we both heard someone running towards us. It wasn’t Axel, nor was it Johnny or Jackie. It wasn’t even Tyler, though he wasn’t […]